Our Story | About Us | SunRice

SunRice is one of the largest rice food companies in the world and one of Australia's leading branded food exporters.

Discover SunRice, our people and our brands.

Jō Takasuka, accompanied by his wife, Ichi, arrived in Melbourne in 1905 from Japan.

Within 18 months, Takasuka had moved to Nyah, Victoria, sowed 35 acres (14ha) of Japanese rice grain on land rented from a local farmer, and entered into negotiations with the Victorian government to acquire a suitable allotment of crown land subject to annual flooding on which to cultivate rice.

Takasuka persevered through floods and droughts to finally produce rice for commercial sale. His first success was in 1911 when test-plots on his property were harvested. Using these seeds, he grew rice successfully on small parcels of rented land for the next three seasons.

In 1914, the Victorian government allocated 200 acres (81ha) of flood-prone land on the Murray River near Swan Hill to Takasuka for the purpose of demonstrating the cultivation of rice from Japan. He sold the first successful crop of seed back to the government and inspired the formation of the Australian rice industry.

Our proud history dates back to the establishment of a single rice mill in the Riverina region of New South Wales in 1950. Today we have operations – including state-of-the-art processing, packing and value added food plants - across Australia, the USA, the Middle East, the Pacific and Papua New Guinea.

We supply almost 50 countries with diverse, innovative and nutritious rice food products, and through our successful food ingredients and foodservice divisions, contribute to thousands of other brands and businesses the world over. We’re a major player in the domestic market as well, supplying a staple food for households around Australia.

Our company was built by the Australian rice industry over many decades, and today it’s strengthened by a broad portfolio of subsidiary and complementary businesses.

We’re an Australian supermarket leader in olives, condiments and more, through Riviana Foods and their “Always Fresh” flagship brand. We’re a major business in Papua New Guinea, where Trukai Industries employs more than 1,000 people and has operated for more than 40 years. We’re the preferred rice supplier of tens of millions of people in the Middle East where we have a marketing office in Dubai. We have a base in Singapore that provides us with a regional presence and proximity to service the burgeoning markets of South East Asia and China. And we’re part of the convenience rice foods market in America, where our SunFoods’ Hinode brand can be found in retail giants like Walmart and Kroger.

Added to this, is our enviable position in the pet and livestock industries via our animal feeds division CopRice; our own dedicated rice research company; Solomon Islands’ operation; and sophisticated local grain storage network.

See all our brands

SunRice is a dynamic rice food company with a vision to become the World’s Favourite Rice Food Company. Through innovation, initiative and operating excellence SunRice develops great tasting and nutritious foods that excite and satisfy consumers all over the world.

SunRice has had a long association with Australian agriculture and the land. It formed in 1950 when early rice growers pooled funds to establish a co-operative and built a much-needed rice mill at Leeton in the Riverina. In 1955, the co-operative launched its own branded retail pack of 'Sunwhite' rice.

It was the first time that nutritional value and product quality and consistency were emphasised in the marketing of Australian rice. Decades of research and adoption of new technology followed, with SunRice manufacturing an ever-growing and innovative range of new products from rice and rice by-products.

As in most industrialised countries, the potato was the historic staple carbohydrate in Australia. Rice was traditionally seen as an accompaniment to dishes such as curry, and perhaps as an occasional dessert.

The great opportunity for SunRice came in the 1970s when migration from Asia to Australia was significant and the cuisines available in Australian cities changed almost overnight. Thai, Malaysian, Indonesian, Japanese, Vietnamese and Korean restaurants appeared, featuring rice as the main carbohydrate. Suddenly Asian food was very fashionable.

As Australia became more cosmopolitan, Australians grew increasingly interested in cooking Asian and other ethnic foods at home, leading to a new market for rice.

With a long tradition of co-operation and growth, SunRice is now one of the biggest branded rice food companies in the world, and an Australian icon.

See More
places we sell to 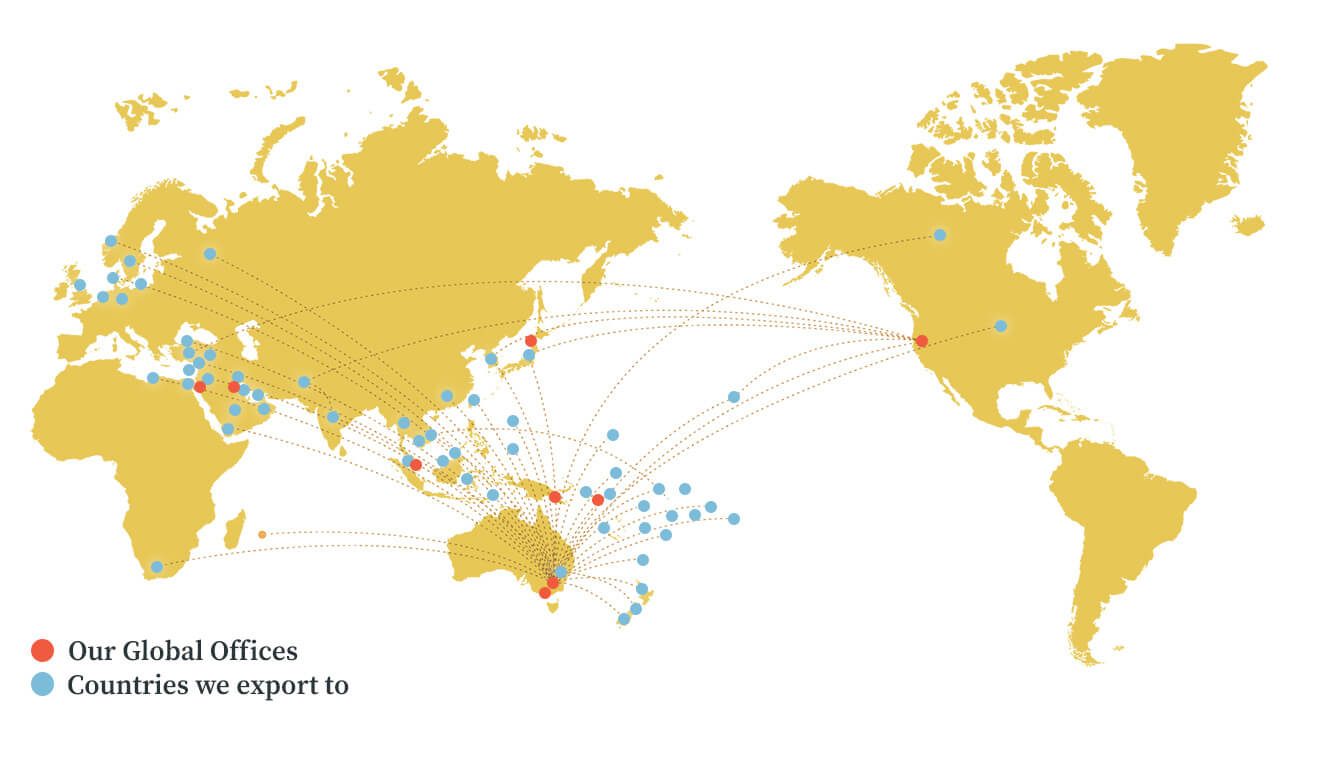